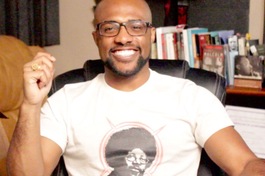 Jamel Coy Hudson is a multi-talented singer, dancer, actor, musician, comedian, athlete, rhetorician, and educator. His ability to combine education and entertainment into his numerous presentations have allowed him to use his many skills to “edutain” audiences around the country. A native of Long Island, New York Jamel Coy Hudson was exposed to the distinct worlds of education, performing arts, and athletics early on in his life. With both of Jamel’s parents being educators, he was always taught the importance of hard work and applying one’s self through education. With a thorough understanding of the benefits of receiving a proper education, Jamel uses his abilities to encourage students to receive an education and use their abilities for a good cause.

Jamel Coy Hudson attended St Anthony’s High School where he continued to perform on stage, excel in his academics, and also involve himself in athletic competitions. While wrestling for St. Anthony’s Jamel Coy Hudson was a 3x Catholic League Champion, 3x Catholic State Champion, a 2x All-State Wrestler and a High School All American. During his senior year, Jamel Coy Hudson captured the New York State Public School Wrestling Championship and was named the Most Outstanding Wrestler at the state tournament. Before winning a State Championship, Jamel made wrestling history by recording the quickest pin state tournament history. He also made history by becoming the first athlete to ever sing the national anthem before capturing a state title. Because of these accomplishments, Jamel Coy Hudson was named St. Anthony’s High school Athlete of the year, Long Island Wrestler of the year, The New York State National Wrestler of the Year, and was featured in Sports Illustrated Faces in the Crowd.

Professor Hudson also serves as the Director of Educational Outreach the not-for-profit organization Empower 1 Self, Inc. As the director, Jamel Coy Hudson travels all over the country speaking, conducting seminars, and orchestrating workshops that address topics like bullying, character education, and student-athlete mentorship. Under Jamel Coy Hudson‘s leadership, Empower 1 Self recently launched a summer and winter learning program to provide a safe space for students on Long Island to spend their school recesses. This past year Empower 1 Self was able to service over 100 kids and provide them with a safe space to play, free breakfast and lunch, and daily teachings that emphasized character development.

Jamel Hudson’s work has received numerous awards and he has been featured on NBC, CBS, ABC, and CNN for his ability to edutain audiences of diverse demographics. Although he has accomplished a lot during his short time on this earth, he believes that the Lord has more in store.

A Day In the Life of Jamel